The long way back 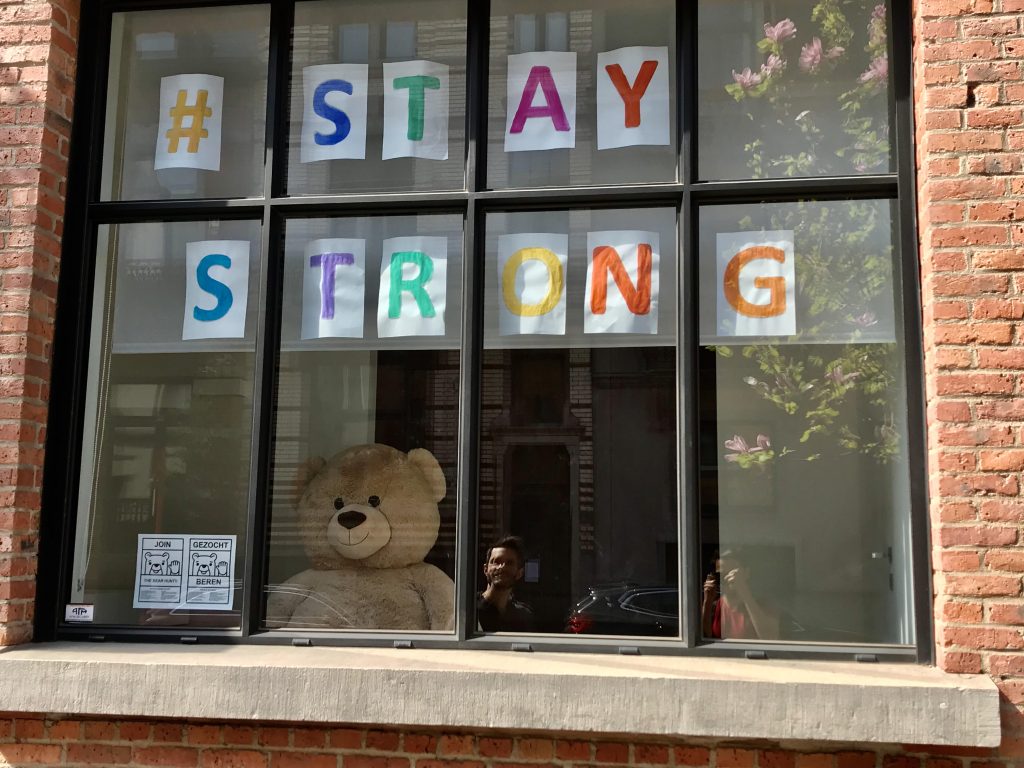 It is Easter Monday and the streets in Brussels are deserted. Sometimes runners pass by, the occasional car makes it way on empty streets. Litter is dancing in the wind. Windows of houses display rainbows drawn by children, here and there people painted colourful signs on sheets: ‘Tous ensemble!’

This is the new normal. The corona normal. And it is not going to end soon.

So much has been written in the past month about the lockdowns, the spread of the coronavirus and the human tragedies in hospitals and nursing homes, that it is difficult to find words that haven’t been used already, to describe or capture this unprecedented, historical situation. That said, I want to share some thoughts – worries, mainly – about how we can get out of the crisis.

For starters, I am really annoyed by all those righteous analyses of people who claim to possess the truth on corona. The underlying argument of their story is always the same: ‘See, I knew this was going to happen because [select a cause] globalisation / neoliberalism / plundering the earth is out of control. We will go into a systemic change from now!’ I even read an article of someone claiming the link between climate change and the coronavirus. But this is a skewed line of thinking and won’t help us get any further.

I am the first to acknowledge that overpopulation, depletion of natural resources, industrial farming and high rates of globalisation all are factors that have made the risk of such a pandemic as we currently experience, very high. Widely shared on social media are speeches of Bill Gates, Barack Obama and other leaders stating that it is not a matter of if but rather when the pandemic will break out. And when it breaks out ‘we’ should be ready.

Clearly the world was not prepared – apart from Eastern Asia, which is a region that is harnessed well against outbreaks of viruses, notably after the SARS crisis of 2003. But for the rest of the world, there are no dams or barriers high enough to stop COVID-19 from spreading.

We found ourselves in a situation that is comparable to a period of grief. First there is denial, then anger, followed by bargaining, depression and finally acceptance. I don’t know in which stage the world is now, but my main point is that this is a crisis that will not go away after one, two or even six months of lockdown. Humans are extremely vulnerable to the virus and that just puts everything on hold.

We should abandon the hope that the virus will pass soon. Until there is a vaccine that works there is nowhere to hide, apart from your living room. In the meantime, we should go to into a state of ‘open patience’, as the Dutch philosopher Luuk van Middelaar wrote a few days ago in NRC Handelsblad.

Of course, societies cannot remain on full lockdown for an extended time. For a start, it kills the economy. Nearly 200 million fulltime jobs will be lost in the next three months. In the United States, already the worst coronavirus-hit country in the world, 16 million people lost their jobs in the last three weeks – which equals ten percent of the American labour population. This is pictured in a mind-boggling graph:

Politicians across the globe are now doing the right thing: flatten the curve, stop the virus from spreading so fast that it overwhelms our healthcare systems. We all know this by now, but actually it took a few weeks into the crisis before this strategy became apparent.

But what after the intensive cares are no longer overloaded and infection rates have lowered, while testing has been ramped up? If the lockdown is respected, countries should be able to move into the next phase – a time in which we can relax the lockdown rules.

In this phase, the virus is more or less under control, but the fire is not extinguished. Flames will flare up regularly, after which society immediately has to follow the stricter regime rules. So schools may open, and close again. People could go back to work: first a few days a week, then fulltime, and then suddenly they have to work from home again. The same applies to shops, cinemas, restaurants, event locations, airports and borders.

In other words, we turn our economies and societies partly on and off, until A) the virus vanishes miraculously or B) a successful vaccine is introduced. (I don’t believe in herd immunity as the third option, because that is years away from now and we don’t know if people are actually immune after contracting COVID-19). The advent of a vaccine will take a year if everything goes well, but it is likely to take longer. Until then, we’re fucked.

It is this phase that I am most worried about, for the simple reason that ‘we’ cannot hold our breath for so long. EU Commission President Von der Leyen says that we have to live with the virus for the time being. But we can’t. It kills us and puts our countries in a state of paralysis.

Apart from the massive discipline needed from citizens, my fears are about the following consequences of such an on-and-off society.

First of all, economic havoc will rain upon our heads in this time. And every week will lead to more damage, more job losses and more financial strain. The IMF is already stating that the world will experience the worst economic fallout since the Great Depression. This year alone, the economies of some countries could contract by more than ten percent (worst-case scenario).

Sectors that are hit extremely hard are in the field of transport, tourism and entertainment. A massive nationalism of airlines seems likely. The automotive industry is on its knees. Revenues of hotels, b&bs and other travel/tourism segments have evaporated. Millions of restaurants, cafes and cinemas across the globe face imminent bankruptcy. Even online food delivery services face a hard time in some markets.

Even if countries keep the economic damage limited, they will suffer from severe disruptions of supply chains, disappearing demand from key trade partners. We already see in the Netherlands a bizarre effect: millions of tulips and roses are destroyed because they cannot be sold. If flowers are not able to being exported, what then for machine parts, chipsets and other semi-finished goods? How long can factories run if supply chains dry up? The internationalisation of the economy has made itself fragile for disruption.

(Speaking of internationalisation, it goes without saying that countries without proper healthcare systems face an unprecedented crisis which will be much worse than here in Europe or Northern America. The hammer will hit hardest in parts of Africa, Latin America and Asia. Read this tough analysis of the New York Times on the drama that will come)

Secondly, finance. As the economy grinds to a halt, states and financial institutions step in, with support measures of trillions of euros. The speed of the intervention of governments is unprecedented and should be welcomed. But debt levels of many countries have not recovered from that previous crisis, the credit crunch of the late 2000s. It seems we in the West will all be like Japan in a matter of months: unsustainable levels of debts for decades to come. Not to mention the huge risk that the ECB and others are taking with the ‘whatever it takes’ policy. Can our financial institutions survive a year of corona crisis, or will they collapse?

I also fear a plethora of knock-on effects as a result of the lockdowns. What will happen with developing economies and nations that now see foreign investments being hold back or even reverted? If one sector goes down, what will happen to the others? Can the 27 EU Member States coordinate their exit strategies, to prevent the Single Market from collapsing? Will budgets for addressing climate change be used for the emergency measures? Can democracies withstand the temptation to keep the current police-state measures in place, once COVID-19 belongs to the past? And what will the crisis do with our minds, our mental health, especially for those that have been hospitalised on the intensive care?

It makes no sense to formulate answers to these difficult questions, as we are at the very beginning of the crisis. But we need to observe, make plans, define strategies to handle the many dilemmas that will come on our plate very soon.

Let’s end with a few signs of hope.

Humanity is everywhere. Not just us as humans, but the way we take care of each other. By and large, societies across the world have wilfully accepted draconic measures that limit their freedoms. And all for the greater good: to save the old and the weak, out of respect for the healthcare workers, in consideration of the collective. Even in our highly individualistic societies that dominate the West, we think of the other. That goes beyond the bear hunts, the daily clapping ceremony, warning strangers to take a bit of distance. It is deeply empathic.

We reflect and reconnect. Suddenly our lives are put on hold. What do we do with all this time? I am only speaking about what I see in my direct environment, so not generalising for everyone, but I note that many people reach out to one another, reconnecting with friends, family and acquaintances, even if it is only online over Zoom, Skype or Hangout. Signs of aggression and impatience in public areas and in traffic are gone, people seem more polite and caring. We slow down and therefore see more details of our area of confinement: flowers in blossom, a renovated house, smiling neighbours. We hear the birds sing, we can sniff the clear and clean air, look at more stars at night. Suddenly people realise that humans are a part of nature and vice versa. We revalue the value of life, of living. Maybe this introspection will end with the eradication of the virus, but it is a wonderful side-effect of this fearful period.

Pharmaceuticals are united in their efforts to beat the virus. China released important characteristics of the virus at a very early stage, which helped kick-off research already in January, gaining critical time. Clinical trials are already starting. The Bill and Melinda Gates Foundation will help prepare massive production capacity for seven different coronavirus vaccines, even if only one or two of these will prove useful. Gates will waste billions of euros with this approach and he doesn’t care. Because we don’t have time to wait for vaccine production to start up only after the right one has been found. Better to bet on seven horses at the same time.

Finally, the state is back. In 2011 I wrote a book on the decline of the power of the state (De machteloze staat), but that thesis is (alas partly) no longer valid. We need governments more than ever. They are the only institutions that can protect us (this is the prime reason of existence of states), not just in economical terms but also as a society. And they do this well. In a time of deep polarisation in society, of a dismissal of the added value of governments or democracies, a surge in legitimacy and accountability, is a fantastic and hopefully longterm effect of this historic crisis.